The dates of NFP Awareness Week highlight the 50th anniversary of the encyclical Humanae Vitae (July 25) from Pope Paul VI and the feast of Saints Joachim and Anne (July 26). 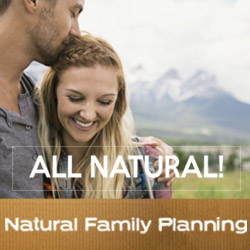 joins with the bishops in highlighting the need to promote the blessings of children and the harms from contraception.

Married couples who use NFP and SPICE report many benefits including: better communication between spouses, increased patience, increased emotional maturity, deeper understanding of each other’s bodies, and growth in respect for God’s gift of fertility.

Resources for celebrating and promoting NFP Awareness Week in your area can be found at One More Soul .  For more information, contact nfp@usccb.org. To learn more about the Creighton Model FertilityCare System and SPICE please contact us: santaana@safcc.org

Can NaProTECHNOLOGY help me get pregnant?

Yes! For couples of regular fertility, the identification of the woman’s fertile days through Creighton Model charting can help couples to achieve pregnancy 76% of the time after just one cycle, and 98% after five cycles .

For couples who suffer from infertility as a result of common conditions such as endometriosis and PCOS, Creighton Model charting combined with Medical and Surgical NaProTECHNOLOGY can help 40-45% of them to naturally achieve pregnancy and live birth within one year, and 75-80% within three years (pregnancy rates may vary, depending on the cause(s) of infertility).

In honor of this year’s National Infertility Awareness week (April 19-25), I wanted to spend a few days recognizing the struggle and the heartache and the sometimes silent suffering of couples who are bearing the cross of infertility in their marriages.

And I wanted to highlight some of the hopeful, heartfelt efforts to help and to heal which the Catholic Church is making (yep, you read that right) and, in fact, has been making, for quite some time now.

I also wanted to bring a few new voices into the mix, stories that you won’t hear from my perspective, because so far I have nothing but empathy and a view from the sidelines on this issue, for which I’m incredibly grateful (yes, grateful, in spite of the craziness of raising tiny humans and the difficulties of pregnancy). So for the next couple days I’m delighted to have some women coming into this space to share their stories of infertility, and their journeys toward building the family God has called them to, in cooperation with His will, not in spite of it.

So much of what we hear about infertility has to do with economics and technological “advancements” and is far, far too often dismissive of the pain and the frustration couples who find themselves in this place are facing.

Just save up and get the materials collected to have some embryos created.

Have you thought about surrogacy?

Well at least you can adopt.

Relax, you’re not getting pregnant because you’re trying too hard!

And other illuminating nuggets of cultural wisdom along those lines.

Rarely, if ever, are the underlying medical condition(s) of either spouse considered until well into the process. Most (not all, but most) fertility MDs are eager to proscribe pills and procedures with an eye towards conception, not stopping first to consider the related systems and potential deficiencies of a body – or bodies – that isn’t working properly to begin with.

That’s where the Catholic Church blows the rest of the reproductive medicine and technology field out of the water. Because not only does she champion NaPro and other medicines that respect the dignity of the lives (and potential lives) of all parties involved, but her methods are actually the most effective of all other Assisted Reproductive Technologies out there.

Yep, NaPro is more successful than IVF. And it has the primary benefit of being completely moral and completely in line with the profound dignity of sex and the human person. No disposable embryos, no illicit sperm collection, no chance at forgetting – or simply denying – the human dignity of the persons involved. Just good science and ongoing research that asks the why of a couple’s struggles with infertility instead of jumping right to the how can we fix this, at any cost?

Now it’s not perfect, and of course it doesn’t work for every couple, but it is still the single best option in a sea of murky and immoral options and an immense amount of money.

(Important disclaimer: many people – even Christians – are woefully uneducated about the nature and the methods of traditional infertility treatments and ARTs. For them, the culpability of cooperating in evil is greatly reduced. And always, always, the dignity of the human person stands, no matter if they were conceived in rape, incest, or a million dollar laboratory.

All persons are created equal, but not all methods of creation are permissible – because they do not honor or recognize that innate human dignity, first, and second because they circumvent or bypass entirely the marital act, which is sacred in and of itself. End disclaimer.)

So I hope you’ll stick around this week because I have some wonderful stories to share with you. Not my own, but dear to me because they are my sisters’ stories, and because we are all members of the suffering body of Christ.

And if you know someone who is struggling with infertility right now? I’ll have some great advice from another mama in the trenches about how you can love them best. Even if it’s only (only!) through prayer and unwavering emotional support.

We’re all in this together, after all. And we’ll each of us be asked at some point to carry crosses whose weight would crush us, should we attempt to go it alone.

That’s what this week is hopefully about: dispelling the myth that any of us, no matter what we’re facing, is going it alone.